Originally posted on mini MAD MOD 60s/70s:
by “ModelBrat60s” The Editors of All the Teen Magazines Knew They Had a Hot Property in Colleen Corby COLLEEN CORBY was one of the all-time favorite SEVENTEEN models. Starting her career at a very young age, posing for American Girl, The Girl Scout magazine, Co-ed,Teen, Ingenue, she…

Coming s007n: Barbara Bach/ Caroline Munro ~ For Your Spies Only

… These are the lovely ladies and gorgeous girls of eras gone by whose beauty, ability, electricity and all-round x-appeal deserve celebration and – ahem – salivation here at George’s Journal…

Yes, the release of the latest entry in the cinematic Bond canon is less than two weeks away now and, as we get closer to this latest dose of the big-screen Bond, this very blog is ramping up its anticipatory mini-season dedicated to all things 007 (under the loose title ‘Coming s007n’) with a couple of posts dedicated to supreme Bond Girls of past and, well, future. Back to the past first, though (after all, that’s what this blog’s really about) – and in particular the summer of 1977 – for that season’s sensational superspy blockbuster The Spy Who Loved Me gave us both the adorably beautiful Barbara Bach and the bodaciously buxom Caroline Munro… 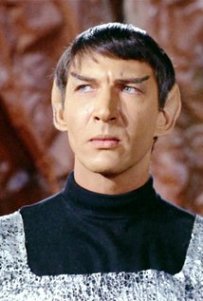 Lawrence Montaigne, a character actor frequently seen on television in the 1960s and ’70s, has died at 86.

Montaigne may be best known for the 1967 Star Trek episode Amok Time. He played Stonn, the Vulcan boyfriend of T’Pring (Arlene Martel), who is betrothed to Spock (Leonard Nimoy).

It’s one of the best-remembered episodes of the 1966-69 series in part because it includes a fight between Spock and Captain Kirk (William Shatner), which is heightened by a Gerald Fried score. Years later, the Jim Carrey movie The Cable guy did a parody, including Fried’s music.

Montaigne also was in the cast of an earlier Star Tre episode, Balance of Terror, in a different role.

The actor was more than Star Trek. He was in the large cast…

Why we mourn those we’ve never met

Over the weekend, we witnessed the passing of Chuck Berry, a Rock ‘n’ Roll pioneer (age 90); Jimmy Breslin, a distinguished columnist and journalist (age 88); and Bernie Wrightson, a notable comic book artist (age 68).

Their life details and accomplishments vary. But all three touched many. Social media was flooded with remembrances by fans.

A natural question is why so many can feel so intensely.

One answer is those involved touched many people. The passing of those who died this weekend somehow seems personal.

In a way, it is personal. Besides admiration for the accomplishments of the departed, there’s an additional layer of sadness. A piece of one’s own life has died. It is a reminder of one’s own mortality.

Baby Boomers likely are feeling this most of all. That generation is either in retirement age or approaching it. A weekend like this…

Caesar’s Wife, a fourth-season episode of The FBI, directed by Robert Day. Spymaster Russell Johnson (left) is about to beat up Harrison Ford.

Robert Day, whose long career included directing episodes of The Avengers and Quinn Marin television shows, died on March 17 at the age of 94, Deadline: Hollywood reported.

The British-born Day helmed six episodes of The Avengers, including From Venus With Love and Mission…Highly Improbable.

Relocating to the United States, Day was frequently employed by QM Productions, including nine episodes of The FBI, two episodes of The Invaders, Barnaby Jones and The Streets of San Francisco. He also directed a TV movies for QM, 1970’s House on Greenapple Road, which launched the Dan August TV series.

Day’s work on The FBI, included a notable fourth-season episode, Caesar’s Wife, in which a Soviet spymaster played by Russell Johnson beats up a character played by the…

George Smiley is returning in a new novel by John Le Carre, THE ASSOCIATED PRESS REPORTED.

“According to the publisher, the novel tells of how Smiley and such peers as Peter Guillam receive new scrutiny about their Cold War years with British intelligence and face a younger generation that knows little about their history,” AP reported.

Smiley appeared in a number of Le Carre novels, including Tinker Tailor Soldier Spy, Smiley’s People and, most recently, 1990’s The Secret Pilgrim. In some novels, he’s a primary character, in others a secondary one.

Smiley has been portrayed by several actors, including Alec Guiness and, most recently, Gary Oldman in a 2011 film adaptation of Tinker Tailor Soldier Spy.

Thomas Jefferson and the Case of the Missing Letters

After a meeting with President George Washington in Mount Vernon on October 1, 1792, Secretary of State Thomas Jefferson rode off to Alexandria. It was only later that day did he realize he “unfortunately dropped… some papers… [on] the road between Mount Vernon and Alexandria,” as stated in his letter to James Madison.[1] At this time Madison was a Representative in the House for the State of Virginia.

On October 7, 1792, President George Washington received a package from a neighbor, who so graciously returned Jefferson’s papers that were “found in the Road.” Washington sent one letter in the stack of papers to the Alexandria post office, and then forwarded the rest to Jefferson to “relieve [Jefferson’s] anxiety.”

Continue Reading
Colonel Assignment – and thoughts about writings and the world
Blog at WordPress.com.